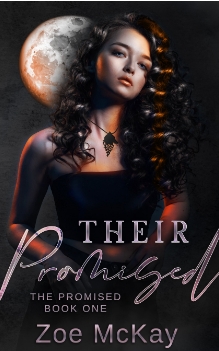 My worst nightmare thrusts me into a future I never could have imagined.

A few months before my eighteenth birthday, my parents die, and I’m sent to a foster home. While trying to escape that nightmare, I end up in the hospital where I learn I have family I’d never been told about, and end up in the Texas Hill Country. It’s gorgeous and peaceful, but the peace doesn’t last for long. Apparently, family isn’t the only secret my parents kept from me. So many secrets. Secrets that change my life in a way I never could have imagined. The biggest surprises though are Gage, Cody, Blake, Ryer, Wyatt, and Travis – six amazing guys who help me traverse the new world in which I’ve found myself. But will they be able to prepare me quickly enough to evade the sinister forces that threaten my existence?

The Promised Triology is a slow-burn, why choose paranormal romance where Aria won’t have to choose between her love interests. She gets to have them all.

*No open door sex in the first book. This is a very slow-burn building to a medium heat level.

**Trigger warning: Mention of sexual assault but no graphic details.

Also Coming Soon In This Series...

Everything inside me screamed for escape.
“Aria! Get back here!” The deep baritone of my foster father’s voice boomed across the yard.
My breaths came in ragged gulps from fear as I pushed myself across the lawn toward the street. The fresh bruises on my legs throbbed as if he still had his hands there.
I kept running, but turned my head to make certain he hadn’t come after me. Fury clouded his face, his hand gripping the doorframe. When his mouth opened and the anger in his expression changed to shock, I turned back just in time to see the grill of a car hurtling toward me.
Brakes squealed, but made no difference. It had been too close. The bone in my leg snapped, agony tearing through me from the impact before everything went black.

Want more? Scroll up to pre-order from your favorite retailer.

In the meantime, you can get the first five chapters delivered to your inbox as soon as they become available by subscribing to my email list.

Featured Reviews
We use cookies on our website to give you the most relevant experience by remembering your preferences and repeat visits. By clicking “Accept”, you consent to the use of ALL the cookies.
Do not sell my personal information.
Cookie SettingsAccept
Manage consent

This website uses cookies to improve your experience while you navigate through the website. Out of these, the cookies that are categorized as necessary are stored on your browser as they are essential for the working of basic functionalities of the website. We also use third-party cookies that help us analyze and understand how you use this website. These cookies will be stored in your browser only with your consent. You also have the option to opt-out of these cookies. But opting out of some of these cookies may affect your browsing experience.
Necessary Always Enabled
Necessary cookies are absolutely essential for the website to function properly. These cookies ensure basic functionalities and security features of the website, anonymously.
Functional
Functional cookies help to perform certain functionalities like sharing the content of the website on social media platforms, collect feedbacks, and other third-party features.
Performance
Performance cookies are used to understand and analyze the key performance indexes of the website which helps in delivering a better user experience for the visitors.
Analytics
Analytical cookies are used to understand how visitors interact with the website. These cookies help provide information on metrics the number of visitors, bounce rate, traffic source, etc.
Advertisement
Advertisement cookies are used to provide visitors with relevant ads and marketing campaigns. These cookies track visitors across websites and collect information to provide customized ads.
Others
Other uncategorized cookies are those that are being analyzed and have not been classified into a category as yet.
SAVE & ACCEPT